National Doughnut Day started in 1938  as a fund raiser for Chicago’s Salvation Army. Their goal was to help the needy during the Great Depression, and to honor The Salvation Army “Lassies” of World War I, who served doughnuts to soldiers in the First World War. 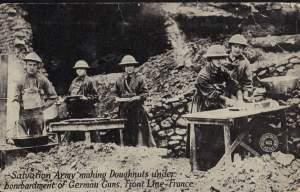 Soon after the US entrance into World War I in 1917, The Salvation Army sent a fact-finding mission to France. The mission concluded that the needs of US enlisted men could be met by canteens/social centers termed “huts” that could serve baked goods, provide writing supplies and stamps, and provide a clothes-mending service. Typically, 6 staff members per hut would include four female volunteers who could “mother” the boys. These huts were established by The Salvation Army in the United States near army training centers.

About 250 Salvation Army volunteers went to France. Because of the difficulties of providing freshly baked goods from huts established in abandoned buildings near to the front lines, the two Salvation Army volunteers (Ensign Margaret Sheldon and Adjutant Helen Purviance) came up with the idea of providing doughnuts. These are reported to have been an “instant hit”, and “soon many soldiers were visiting The Salvation Army huts”.  Often, the doughnuts were cooked in oil inside a metal helmet of an American Soldier.  Salvation Army Lassies were the only women outside of military personnel allowed to visit the front lines.  Lt. Colonel Helen Purviance is considered the Salvation Army’s “first doughnut girl”.

Soon, these workers became known by the servicemen as “Doughnut Dollies”.

When receiving your free doughnut today, remember the true meaning of why you are receiving this today. 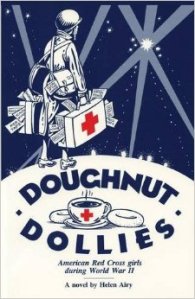